Are you interested in connecting with the beauty of stillness and do a morroco tour ? If you can find the feel anywhere i twill be in the Sahara Desert, morocco.


A Sahara escape from the distractions of life

In the teachings of meditation, it is spoken of that if you are lucky enough to find your self stilled and in compete observation of your surroundings, then the wise man would hold onto that moment and make it last.

Usually, when there is a hint of empty space in our daily lives, many of us fall into our automatic behaviour patterns of distraction, this is easily done in our modern world and interactive environments. So a trip to a land where there is nothing to distract the mind will support anyone searching for stillness, aiding the mind to side-step into a moment of inner peace.

Travelling to the Sahara in Morocco

The western territory of the Sahara Desert Morocco, which was formerly Spanish Sahara, was returned to by the Spanish to Morocco in 1975 but the Amazigh people (the ‘Berber’, a word that actually derives from a European term for Barbarian) have been living on this land for thousands of years. Beyond the no man’s land of the deep Sahara Desert you will cross the border and enter Mauritania. 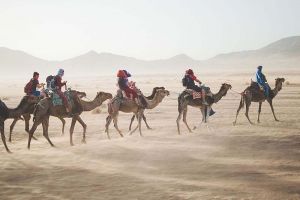 On the Moroccan side of the desert, the towns of Merzouga and Chegaga are where the travellers trail brings you to. It is from here you can find guides to take you on an over night expedition into the Sahara.

If you have spent some time in the Atlas Mountains amongst the peaks of mount Toubkal trekk and friends, then you can head back to the flatlands and begin a Marrakech desert trip. You can venture from the city with a guide and drive down to the southern town of Chegaga.

As you travel south, all the excitement of being surround by the vastness of the Sahara, slowly began to intoxicate the system. There is a particular type of heat in the south of Morocco, the weather of the Sahara Desert is totally dry and there is a heavy silence behind all sounds; the silence you find when all the walls are beginning to disappear, leaving you alone with the awareness of your beating heart, the kind of silence that demands you pay attention to your own existence. But on arrival to the town of Chegaga, you don’t have chance to get lost in the silence for long as there is plenty of activity preparing for the desert trip.

Exploring the dune of the Sahara

The Sahara Desert tour begins with a ride into the desert guided by the nomadic Amazigh people known as the Tuareg. The Tuareg, veiled blue men of the Sahara, travel on camels in their traditional style of clothing which is different to the western styles which have crept into the cities and mountain fashions.

There are many hues of blue fabric being worn and this makes for a striking contrast to the earthen red of the desert sands. If you enjoy to dress in the local styles of a culture then this tradition clothing of the region will be a beautiful indulgence. The blues tones are beautifully rich colours, this way of dressing will look flattering on almost everyone. Having dressed and helped to strap the supplies needed for the camp onto the camels, you will then need to mount the back of your desert transport.

Be prepared, when the camel raises to its feet, the move can jolt you to a very unnerving forward angle, hold on tight so your not catapulted off. Then you can relax into the seat which are made from a pile of Moroccan rugs layered together and strapped to the camels back.

Riding into the desert can becomes very hypnotic. The slowly moving tundra and the rhythmic movement of the camel becomes the points of focus for the mind. The task of keeping your hips and back relaxed whilst the core muscles are engaged, really grounds the mind into your body and you begin to feel at one with the animal.

Riding camel back through the Sahar Desert must be one of the highlights of a trip to Morocco. This is the backdrop to many films, the environment really does transport you to another planet. A Morocco desert camel ride sets the imagination and the heart soring, and the feelings blow you away like the grains of sand from the tops of the dunes. You can look back over the namadic caravan and know that the only tracks left behind are those of your band of adventurers, and you can imagine that you could be the first to cross this part of the desert.

The desert folk are Amazigh people and the origins of their culture date back over 12000 years. They have always been the trades men running the routes from the north and the lands of the Mediterranean and Europe to sub-Sahara Africa. The word Amazigh means free or noble man and these nomads really do live a level of freedom most people in the west could not even comprehend. They have very different cultural traditions, here the role of the women is more assertive than in other Arab cultures.

The women are adorned with face tattoos while the men are required to cover their faces. Like most of the local people of Morocco, they are welcoming and friendly, and at the desert camp they entertain groups of travellers with storytelling, performances of traditional music and dancing. The folk misic they play has a particularly sound due to a cymbal style of instrument that some of the men were playing. The local dancing was free and energetic, lots of hips shaking and seductive belly dancing and this was the men. 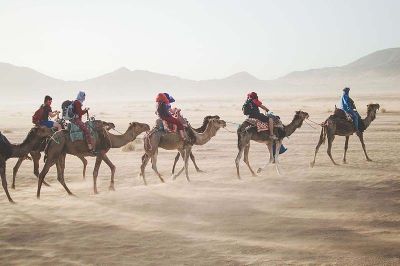 A night under the stars

In Morocco the Sahara Desert camps are magical. The tents are authentically made from the hand-woven rugs of the region and add to the cultural history of the experience. The rugs are traditionally made by the Amazigh woman and the amount of work which had gone into creating them is worth appreciating.

The patterns used on each rug records the story of tribal family history. Sleeping under the artwork of generations, holds a real resonance that you just wouldn’t find with something more modern. The silence of the desert supports a really restful nights sleep.

If you are willing to wake up durigng the night whilst the rest of the camp still sleep, you can spend some time star gazing. The night air may have a cold bite but that will help to shuddered you wide awake, so its all the better for taking in the spectacular view of the star filled sky. Take some time to allow the eyes to open as wide as they can and I would recommend that you find yourself a good comfortable spot in the sand where you can lie down.

You could lie there gaping at the stars for hours. Musing over the names of the constellation that can be observe, and you may even see the milkyway.

Let time fall away and count the shooting stars until morning, loosing yoursel in contemplation about the vastness and wonderous unknows of the universe.

Finding thrills on the dunes of the Sahara

In the morning, following a good breakfast, there is the option of taking a 4×4 tour over the dunes, a joy ride experience like no other. Speeding up the 500ft dunes, to crest the top like the big dipper at a theme park and then, holding on to your stomach, the steep decent with all the thrill of the fairground. In the 4×4 you almost feel like a tiny boat out on the wild ocean being tossed around by the waves. The ups and downs and no fixed horizon, can make it the wildest drive of your life. 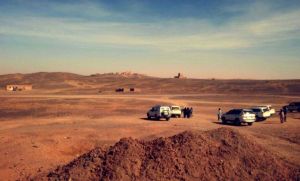 Even the shortest stay here can have such a powerful impact, leaving you with an unforgettable experience. You can make it even more special, if you can travel here for the new year and celebrate in the traditional Amazigh way. This most definitely would be one night to remember.

The desert is a place to find stillness and thrills. The traditions, the excitement, the patterns of the sand dunes and gazing at the stars ; this was the best Sahara Desert tour. A place where you can find a deep level of awareness of your place in the universe.